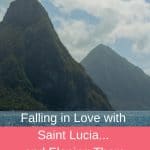 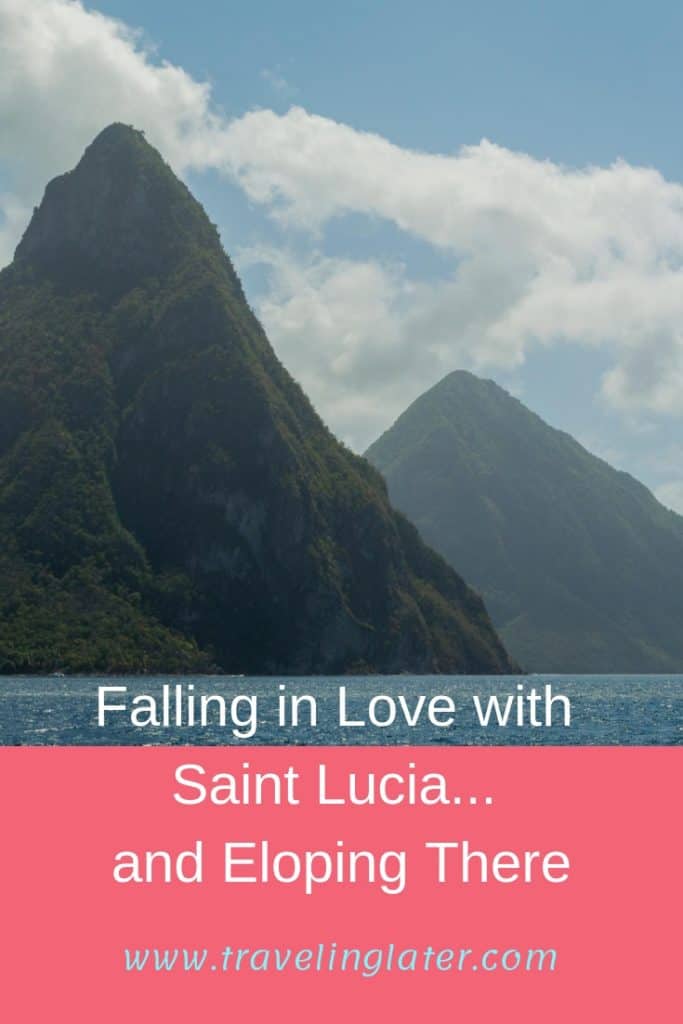 I watched for the island from my window seat for thirty minutes. There was only a never-ending blue ocean. We’d reached the point of exhaustion when travel seems like the worst idea the other person’s ever had - why did you agree to it?

And just like that - two volcanic spires appeared - Gros Piton and the barely smaller Petit Piton. These peaks rise from the dense forest right at the edge of water and island.

I whispered “Krakatoa East of Java.” It looked exactly like that old movie. As a little girl, I believed everything I saw in the movies and, in that one, people desperately tried to escape from an island that's being destroyed by an erupting Volcano. And we were coming to be married here.

Saint Lucia wasn’t our first choice for our wedding. Our heart - and plans - were set on eloping to Italy. But two months before our date, the wedding planner emailed us they were behind, and we’d have to postpone for six-months.

Commence massive head spinning. Do we wait? Go somewhere else? We were so emotionally invested in every visualized detail of our Italian wedding. But - fortunately - I hadn’t booked the flight or Airbnb.

Eventually, we decided not to wait another six months, and for a while, we did nothing more. Until I dried my tears, cleared my mind, and began typing  “the best places to elope,” and “eloping for your second marriage” into search bars. When you take THE perfect place (for us) to elope off the table - the next million options are overwhelming.

Every search returned endless possibilities, and I had to research each one. How easy is it to legally marry in that country? Is there a waiting period? And how about the “do we hate this place” criteria? You know, the internet holds many answers - and leaves as many details out.

I’d like to take you through the steps of how I moved from our Italian romance all the way to a beach in the Caribbean, but I don’t even know. Maybe it was alchemy? But once I stopped pining for Lake Como and embraced finding the best alternative - I was a researching beast. And extremely wishy-washy.

I narrowed it down to Anguilla, Grenada, Guadeloupe, Montserrat, Bequia, Mustique, a couple of private islands - and Saint Lucia. Huge first world problems!

My head spins thinking about how many times I planted my flag and walked it back - over and over. Poor Bob. Poor eye-rolling, heavy sighing, very on the edge of losing it so many times Bob.

If you look at any of the Caribbean islands, you’ll want to go. I mean, yes - to all of them. How could you go wrong? But I had to get it right because it’s our wedding. Lotta pressure.

I think it was decided by the Pitons, in the end. They called me with their towering, silent mystique.

The only thing left to decide was which part of the island and which resort?

The airport for international flights to Saint Lucia is Hewanorra International, at the southeastern tip of the island. Almost at the western tip sits the Pitons while the interior is mountains covered in rainforest. The majority of the resorts run up the west side of the island from the Pitons to the northern tip.

There are magical resorts nestled in the rainforest near the Pitons, and the resorts further north all along the water. The islands hills and mountains - including the Volcano - extend to the sea on all sides.

I started searching for a mid-priced all-inclusive resort. Who wants to worry about mundane money matters in the middle of eloping? But there are so many of them! I painstakingly searched for pictures taken by guests and read years of reviews. It looked like we were headed to a coin toss - until I read one last review.

It was a complaint written about a small resort called The Eastwinds, just south of Rodney Bay. There are less than 40 bungalows and rooms in the entire resort, and I read many guests visited from the United Kingdom, returning often. A lot of the reviewers said they tried not to talk about the Eastwinds because word would get out. (hmmm.) Except for this one mother.

Apparently, the Eastwinds bored her children to death. There wasn’t enough to entertain them - just a pool with a swim-up bar dominated by adults. And a beach to lie on and snorkel in, and stand up paddle boards. There was only a spa, and another bar off the beach, and an open-air library room with another small bar that adjoined the open-air dining room. Dull as dirt for any kid. 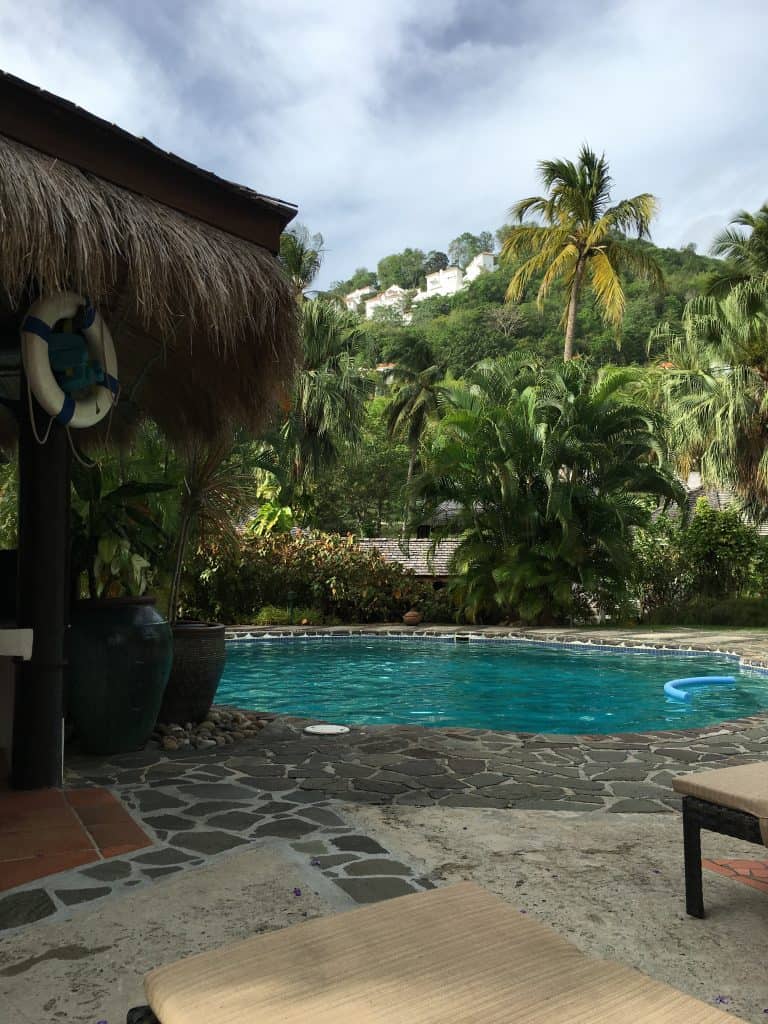 Adult pool with a self-serve swim-up-bar - NOT boring!

Every resort on the island was beautiful. But a place with less than 100 guests at a time, on a private beach in a cove, and filled with other adults? We're having ourselves a wedding!

The resort sent a car to pick us up from the airport. Stepping into the air-conditioned luxury out of the humid tropical air, we pushed down our exhaustion one more time and held hands in the back seat. We were finally here. And we were doing this!

We stared out of the car windows soaking in the island and getting oriented. Like most Caribbean islands, life there is busy. It was the time of day when school buses blocked all two-lanes of traffic dropping off herds of uniformed children. People were everywhere, and so were the wandering chicken, goats, and dogs.

As the car climbed the mountain road through the thick rainforest, we caught glimpses of ramshackle homes made of rocks, plywood, and wires. Some bits of bright primary paint colors, but weathered and fighting for existence. We thought the jungle must make life hard. 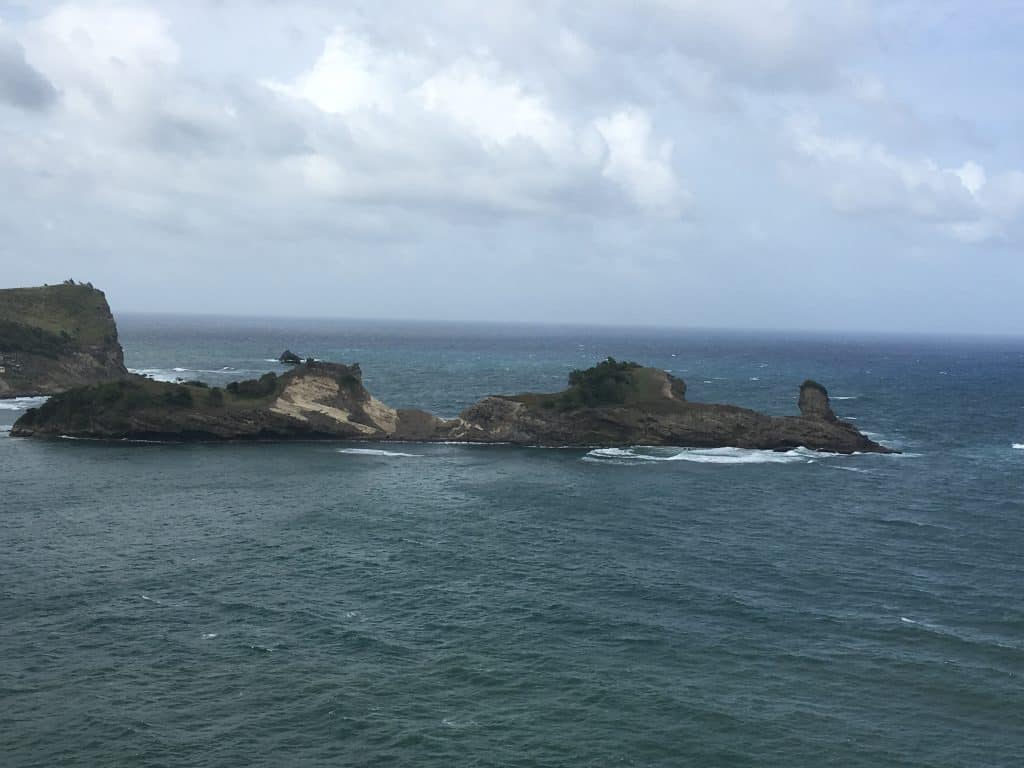 The western coast of Saint Lucia.

Forty minutes later we descended from the mountain, and the car turned north. We caught glimpses of the ocean for another twenty minutes, and we waited. Soon, we hoped, we'd reach a beautiful part of the island filled with resorts.  And there would be less wandering chickens, goats, and dogs outside of weathered homes.

Usually - I travel with no purpose other than to soak in a place - I take it as is and absorb and respect it. But when I’m planning my wedding - I choose a specific setting and feel for where I want it to happen. That’s the place I was looking for as we rode in that car.

So when we slowly turned left off the main road, my vision for our wedding, and what the resort would look like, began to crumble.

That's when I gripped Bob’s hand and whispered (so the resorts’ smiling driver couldn't hear) “Honey I’m so sorry! Oh my god - I blew it! We're gonna have a crappy wedding!” I caught a glimpse of an unsmiling face before he turned to look at a scraggly dog barking at the car. Aaaaand cue tears.

The car turned left again, twisting down an even smaller road until a guard waved us through a gate. Further down we wound, surrounded by jungle as the slope evened out gradually. I was holding my breath and fake smiling for all I was worth - until we rounded a curve to pull into the most beautiful garden filled with an absolute riot of color.

Neat little cottages were sitting all over the manicured grounds. It was so unexpected in that moment of near disaster - and so magical.

I jammed my elbow into Bob’s side and said “HA. I knew it!” 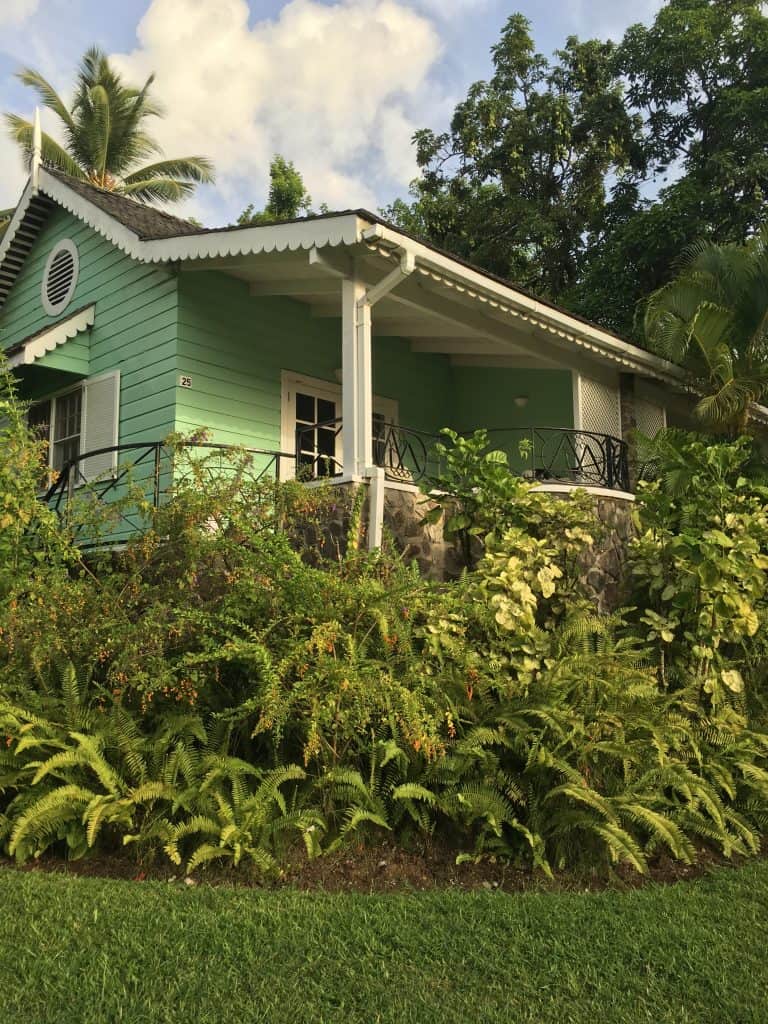 Our bungalow - #25 - on the hillside with our front balcony looking across the gardens to the ocean. 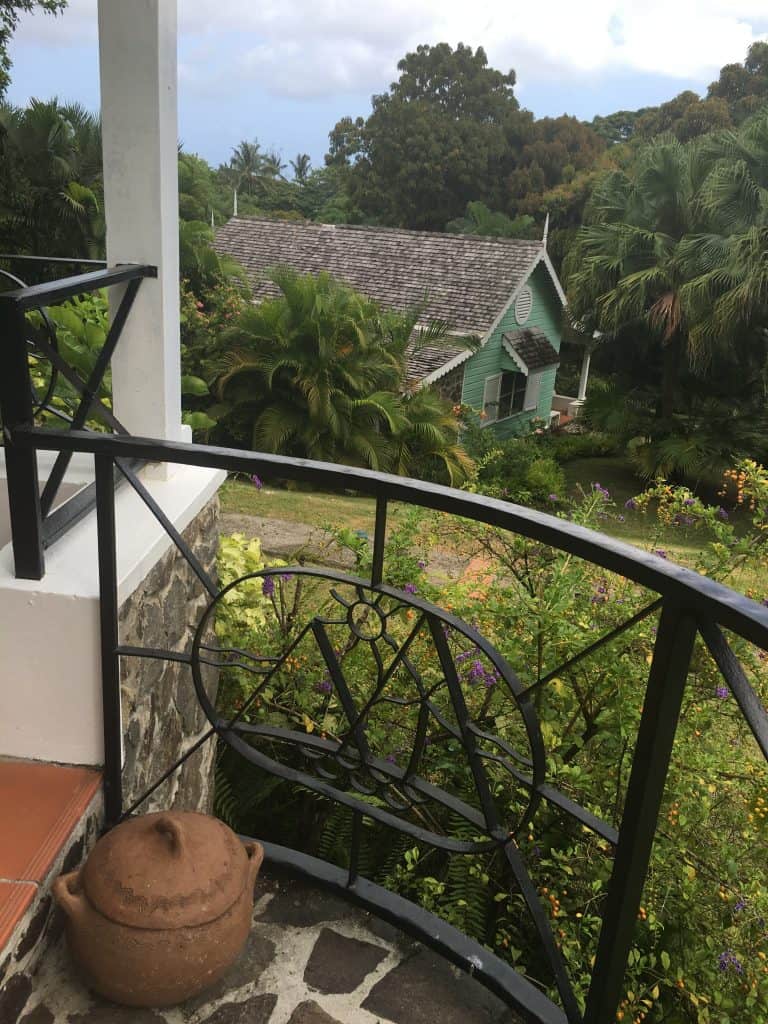 Looking into the gardens down the hillside at EastWinds Resort. 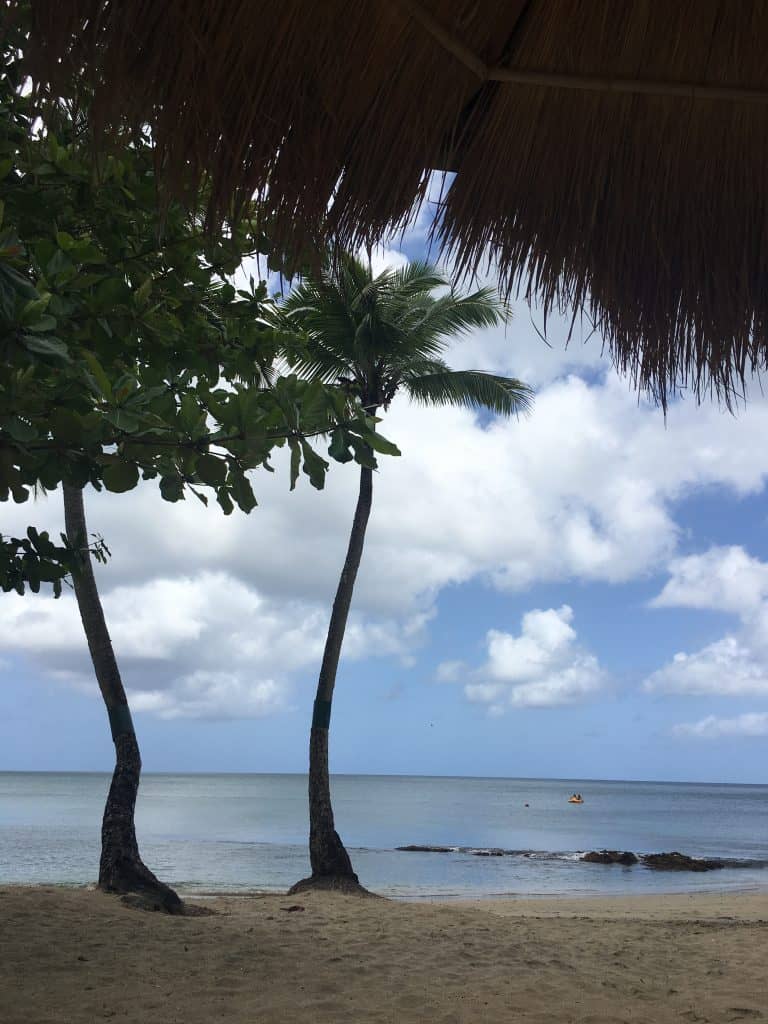 Two palm trees on the beach...THE palm trees, to be exact. Stay tuned!

Stay tuned for Part Two of our Saint Lucien adventure. I’m trying very hard to tell you about this island without relying on a vocabulary filled with meaningless adjectives - but it’s dang hard.

So let me ask you this - have you ever fallen in love with a tropical island? How about eloped? Did you ever watch “Krakatoa East of Java?” Talk to me here (in the comments) and share your stories, please!

We use cookies to ensure that we give you the best experience on our website. If you continue to use this site we will assume that you are happy with it.Ok